The leadership and staff of North Dallas Bank & Trust Co. (NDBT) know how important solid footing is for people: For a community to thrive, people need to have security and stability in many different aspects of their lives. That’s one of the many reasons NDBT got involved with Metrocrest Services in a decades-long commitment to serve that has helped Metrocrest Services clients with financial literacy and food on the table, and a new facility that will help the non-profit serve its mission for many decades to come.

“It’s not just a Band-Aid: it’s helping the community get back on their feet, giving them all the tools so they can be independent,” Megly Wester, Addison banking center manager for NDBT, said of the many ways in which Metrocrest Services helps its clients. Wester and her team have been involved with Metrocrest Services for many years, following a lead set by Jay Henry, the NDBT market president who began volunteering for Metrocrest Services almost 30 years ago.

The team at NDBT feels so strongly about the positive results Metrocrest Services is able to achieve that the company recently made a significant investment in the Metrocrest Services Building Our Future capital campaign. The initiative will bring all of Metrocrest Services’ abilities under one roof in an efficient new home in the heart of need for the community.

Hands-on volunteering, teaching financial literacy classes, and contributing to the capital campaign are all ways in which NDBT has dedicated time, expertise and funding to Metrocrest Services. But the bank has found another way to leverage its deep experience to help the non-profit, too: “We’re helping them achieve favorable financing for the construction of the new facility,” Henry said. “That’s part of our heart and what we do here at NDBT for non-profits.”

The pandemic did not slow NDBT from meeting its mission of caring for the community: In 2021, the company’s non-profit initiative, NDBT Cares, recorded more than 130 service hours and $487,000 pledged to 80 organizations making change in the community, including Metrocrest Services.

“They give us the tools to serve our community; it’s amazing,” Wester said of NDBT Cares and the opportunities she has through her employment at NDBT.

The way in which the employees of NDBT interact with Metrocrest Services serves as a best-practice model for how other companies can get involved with non-profit organizations. The collaboration is meaningful for both the bank and the non-profit.

“They really have been the model of what we hope to achieve with the NDBT Cares program,” noted Lisa Rushing, director of community engagement for NDBT.

When asked how other businesses or individuals could create a meaningful relationship with a non-profit, the team at NDBT had a few tips:

Organize staff to volunteer their time together. “People react to experiences,” Henry said, “Being there, working in the food pantry or delivering a sack full of food to a family because their kids can’t get their food during summertime from school, is powerful. Experiences speak more to encourage people to get involved than anything else. Schedule a volunteer opportunity somewhere to get to know their mission.”

Get to know leadership at the non-profit. “Get to know the people who work there, and their leadership. Tracy [Eubanks] and Nicole [Binkley] at Metrocrest have servants’ hearts,” Henry said. Understanding how the non-profit is governed and how the mission is met is important, he emphasized.

Just start! “Sometimes, people spend a lot of time trying to figure something out,” Henry said. He recommended learning by volunteering. “You will not regret it, and I promise, you will come back for more,” he said. Service is one of the core values of NDBT, he explained: “A statement we use often at NDBT says it all: ‘Treat others the way you would want to be treated.’”

Wester has volunteered in many different capacities for Metrocrest Services. When she began, she thought she would just be called on to help teach the financial literacy class that Metrocrest offers to help clients understand budgeting and money management. The class is part of the “wrap-around” services that Metrocrest offers, including rent and utility assistance, job placement, transportation for seniors and many more, in addition to serving as a food pantry – but Wester has stepped up and served in many different parts of the organization, growing her commitment while sharpening her own skills.

“One thing that I really want is to be a change-maker and the way I can do that is by donating my time to share with everyone else what I know,” she said. “If that helps someone to get a job or be in a better place than they were before, then it’s all worth it.”

With summer coming, Henry and his team of NDBT volunteers expect to help with the Metrocrest Services Sack Summer Hunger program, which gets nutritious meals to children who might not otherwise have access to food because of school being out of session for the summer. There will also be work to do in the food pantry as the need continues to increase across North Texas. In addition to that, NDBT is excited to see the new home for Metrocrest Services rise from the ground.

Henry looks forward to the building’s opening. “I want to see a very busy facility, with a lot of activity coming in and out,” he said. “I want to see Metrocrest Services thrive in a building that’s larger with more square footage and more services than they have ever had before.”

“Seeing that building and knowing that it will be there for years and year to come, serving the community, and saying that we had a small part in it, will be incredible,” Rushing echoed.

“It is partnerships, such as the one with NDBT, that allows Metrocrest Services to achieve its objective of serving our neighbors with dignity and respect, and being able to say yes in their time of need,” said Tracy Eubanks, CEO of Metrocrest Services. “We applaud NDBT for its unwavering commitment to the communities it serves.”

Wester sums up why employees of NDBT feel strongly about working with Metrocrest Services: “The success of a community is measured by the compassion given by its members,” she said. 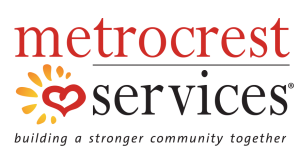